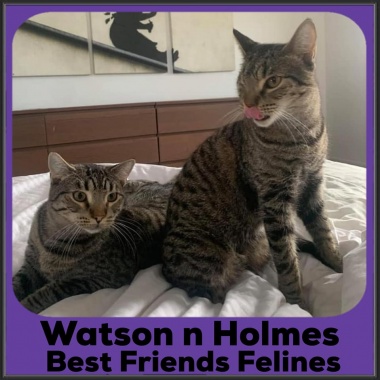 Medical notes:
Watson was born with a congenital abnormality of his sternum called “Pectus Excavatum”. His sternum (breast bone) was concaved and growing inwards towards his chest. This left Watson with a large defect inbetween his ribs, and meant there wasn’t enough room for his heart and lungs to sit comfortably in his chest cavity. Surgery was required to ensure Watson would be able to live a full and happy life like a normal kitten. When Watson was 12 weeks of age he underwent surgery to correct his Pectus Excavatum. A brace, moulded to his body, was fitted to his sternum and sutured through his affected ribs. This brace remained on for 4 weeks and encouraged his ribs to grow out at a more normal angle. Once the brace was fitted, Watson was instantly a different kitten. He could run, and jump, and play for the first time in his life. The brace was removed and his sternum was monitored for several months via x-rays. The end result has left Watson with a normal looking chest, and now no long term issues should come of being born with his condition.
Holmes was handraised from a tiny 10 day old baby due to catching a severe case of cat flu. He was tube fed and received weeks of critical care to fight through the virus. Due to the severe cat flu as a baby, Holmes has loss of the terbinate in his nostrils which leaves his nostrils less protected, and means he is more susceptible to nasal infections (Rhinitis). He has a daily steriod puffer which helps to stop these from occurring. If he does develop an infection, he needs a short course of antibiotics to clear this up. Along with his brother Watson, Holmes was also born with a chest abnormality called Pectus Excavatum. This is where the sternum (breast bone) has grown inwards and misshapen. Holmes has a mild case and doesn’t require any surgery or medication. One side of his chest is a little misshapen but doesn’t cause him any concerns other than a little cosmetic appearance.
About:
Say hello to two very special gorgeous boys – Holmes and Watson! These two boys had a rough start to life and have through many health issues togethers. Because of this, they are vey bonded and need to go to their forever home together.
Holmes is a beautiful young man. He has had cat flu and lost one eye when he was a very young kitten. It doesn’t stop him being inquisitive and affectionate. He loves to be cuddled and petted. A very gentle nature and a very soft coat, Holmes is very friendly. He will need to be adopted with his brother Watson. They are very close.
Watson is Holmes’ brother and friend. They need to be adopted together. Watson is a beautiful tabby with a gentle nature and love of adventure. He will lay with you and just likes to be near you. He loves to be petted and cuddled. Good with other cats and children. He is definitely a people cat.
To arrange a meet to see if this could be your perfect match, please submit our meet’n’greet form.
lynsey2021-07-15T12:19:04+10:00